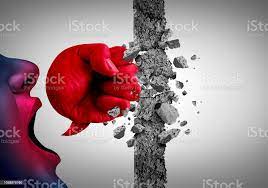 Have you ever had an initial perception of someone changed after having an actual conversation with them?  So many times our perceptions are skewered by past experiences, influences, or relationships.  Racism is formed from a combination of these factors.  Racist remarks and stereotypes are overheard, then an experience occurs that in a twisted way reinforces the remarks.  The result is a settling of a perception that skews future interactions.

The same thing often happens in our relationships to God.  Had a crappy father?  Every time you hear God referred to as a Father you think of your dad and you get a negative feeling.  People on the outside of a "church" upbringing often have a perception of "church" people being judgmental and hypocritical.  Therefore, their perception of the God who these "church" people supposedly serve is skewed.

"Church" people sometimes develop the idea that nobody could possibly be interested in the spiritual life they have discovered in Christ.  This idea forms, then an experience with one or two people works to reinforce the idea, and the next thing you know you have a Christian who sees everyone on the outside in a negative light and they simply stop trying to reach others.

Unfortunately this happens all too frequently between Christians who have differing views.  I have sat through thousands of church services and heard disparaging remarks made about the beliefs and practices of “the church down the street.”  One group says the other is too legalistic, the other points their finger and says you’re too loose.  Too often we compare our best with their worst.

So, how do we move beyond our perceptions?  The only answer I know is through conversation.  Don't let your perceptions prohibit you from engaging in a transformative experience.  Incredibly enough when we enter into a conversation with people or with God we can discover that we were wrong in our perceptions.

If you have been scared off from a relationship with God because of misrepresentations and negative influences don't let it stop you from developing a conversation with Him.  Go ahead and talk to Him.  Make some coffee sit down at a table and talk to God.  Voice every reason you don't want anything to do with Him. The best way I have found to deal with my doubts about the whole God thing is to talk openly and honestly.  I am sure some might call it sacreligious, but it is always real.  Then pick up a Bible and read the Gospels and listen to the passion, sacrifice, and generosity found in Jesus.

Isn’t it a little amazing that with all the “advancements” of our modern age nothing has really changed with humanity.  We often talk about the improvements that technology has brought to our lives, but in the end most of them are pretty superficial.

Air conditioning is awesome, but it hasn’t really done anything to enhance my relationships with my family.  The automobile is great.  I can get to places faster, but if we didn’t have automobiles we probably also wouldn’t have the need to get where ever it is we need to get to faster.

It seems with every advancement there has been an equalizing need created by the advancement that leaves everything the same only different.  What is amazing is that one thing hasn’t changed since the beginning of time—the need for conversation.

No matter how much we learn it seems pointless if we can’t share it with someone.  All the technological advances in the world can’t take the place of two people conversing.  Incredibly enough the threat of brute force doesn’t seem to carry as much persuasive power as talking.

Relationships break down over one thing—not enough conversation.  Money isn’t the issue.  Not talking about shared values and vision will do more damage than a lack of money.  Lack of connection in your relationship is directly connected to a lack of conversation.

In Genesis chapter 1 the first activities between God and man involved conversation.  Only when we began conversation with God and with each other will we be able to step out into a life of meaning and vision.  So, open a conversation today with God and see where it leads.