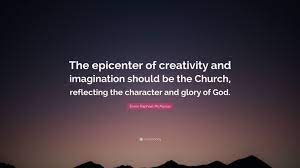 The act of creativity reflects God.  When we create we step into the infinite.  Creating requires intentional activity.  It produces what wasn’t there before.  I find it amazing that music only has a limited number of tones for use, but every year an artist arrives on the musical scene that creates an entirely new sound.

God created.  He took what wasn’t and produced what is.  I believe that within every human there is the ability and the desire to create.  It is a part of being made in His image.  When we create we tap into the infinite nature of God.  The reality that time exists only for a while is realized.  We who are limited still have the ability to operate in the unlimited.

God has made a way, through a relationship with Him for us to become a part of eternity.  Every time we create with goodness we reflect a portion of eternity.  We foreshadow forever with every creative act.  Every new song, every act of kindness, even acts of evil reflect the reality of the unlimited.

The creative act might not have been good, but it was new.  Even though it was meant for evil doesn’t mean another creative act can not make it for good.  I guess the key is for us to first connect to the character of God then create from that position, thus expanding His goodness to all creation.