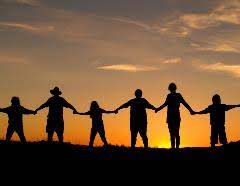 For decades in our American culture the individual took primacy.  We were fed a steady stream of individuality through our media.  Elmo and Sesame Street indoctrinated us with the importance of believing in one’s self.  Our super heroes shared a particular trait besides being super.  Spiderman, Superman, Hulk, Iron Man, Batman, and most of the others were all loners.  We celebrated the iconic CEO businessmen who led their companies to success.  In the church, more often than not, the church was an extension of the pastor rather than the pastor being an extension of the church.

Dreaming has always been central to forming our identity.  Whether in school, at church, through media, or at home, children in America have largely been encouraged to dream and dream big.  For most of my lifetime at least, the role of the community was to strengthen the individual, so that the individual could achieve their maximum potential.  To suggest anything other than this one could easily be labeled a communist, Marxist, socialist, or anti-American.

You can’t have community without individuals, nor can you have individuals absent of community.  Unless of course there is an individual somewhere who came into existence that no one knows about and who also doesn’t know about the existence of other individuals.  If said person exists we will never know, so we are left with the struggle to find the balance between the roles of individuals and communities.

In the story of Joseph we are given initially the story of a young man who receives a dream of greatness.  On the surface it appears that he is the central component to the dream.  His star is the one towards which all others defer.  It is no wonder that we often label him as proud or arrogant.  The problem is this dream came from God.  So, is God elevating individuality?  Is God promoting the pursuit of self as central?  Or is there more going on here?

What is interesting about the life of Joseph is that there are several instances where Joseph is given the opportunity to promote himself, but he doesn’t.  As a slave in Potifar’s house, or as a prisoner in the king’s dungeon he had ample opportunity to give himself a plug.  It is obvious he wasn’t American.  What else is interesting is that Joseph was not just a dreamer, but Joseph was uniquely gifted in interpreting dreams.  Yet, he couldn’t interpret his own dream.

It wasn’t until the end of Joseph’s life that he realized the dream of his youth.  What’s really fascinating about the dream was how it played out for everyone involved.  Did his brothers bow before him?  Yes.  Was Joseph the center of attention in the end?  No.  Throughout Joseph’s life what we see is not a man who clung tightly to his dream, but a man who clung tightly to his God.

When we read the story of Joseph we often focus our attention on what Joseph did or didn’t do.  The actions of the men and women in scripture, though, are not the primary point of scripture.  What is primary is the action of God.  God gave Joseph the dream.  God formed the character of the man.  God placed the man in the moment, and because the man trusted God, the man realized his dream.

When we start the story of Joseph we, like Joseph, don’t know what the dream means.  Joseph’s brothers didn’t care for the dream, especially the part where they weren’t central.  What is interesting is no one questioned if he actually received a dream from God.  They just didn’t like what they thought it suggested.  Which in turn suggests to me that Joseph’s brothers didn’t understand their God.

When the dream comes to fruition, after his brothers have done their kneeling, and Joseph does his revealing, their first response is fear.  What happens next is mind blowing.  They win the lottery.  In a sweeping act of grace, Joseph informs them that from that point forward they will live as if they are royalty.  Through Joseph, God blesses and enriches the entire family, which will one day become one of the greatest nations in the history of man, which will one day give birth to the Savior of all men.

What we learn through this is when God gives dreams to individuals it is always with the betterment of the community in mind.  The world needs your dreams.  The role of the individual is to dream so that the community might be strengthened.  The individual is important, but always with community in mind.  When we receive our dream the primary question is not, how can I make this happen?  What must be kept before us is character (how do I become like the One who gave me the dream?) and community (who else can benefit from the dream?)