The World of Words 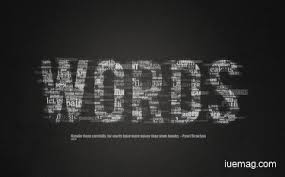 I received an e-mail that highlighted the English language.  You have probably seen or heard it.  The readers digest version goes something like this:

“The bandage was wound around the wound.  The soldier decided to desert his dessert in the desert.  Since there is no time like the present, he thought it was time to present the present.

English is a crazy language.  There is no egg in eggplant, no ham in hamburger, and no apples or pine in pineapple.  Language is full of paradoxes.  Quicksand can work slowly, boxing rings are square and a guinea pig is neither from Guinea nor is it a pig.

Writers write, but fingers don't fing, grocers don't groce, and hammers don't ham.  If a vegetarian eats vegetables, what does a humanitarian eat?

You have to marvel at the unique lunacy of language when your house can burn up as it burns down, you can fill in a form by filling it out, and an alarm goes off by going on.  Language is the communication vehicle of people.  It was not created by machines or computers, and thus it reflects the creativity of the human race (which incidentally isn't a race at all).”

The author was right on.  Words are the most powerful entity we have at our disposal.  That is why it is important we pay attention to the way we use them.  It is why we should know where they come from.  If we were to trace language back to its very beginning we would discover something powerful.

It is impossible to communicate without words.  Everyone relies upon some form of word based communication even if it is not primarily speech oriented.

All things good and evil, creative and destructive find their beginnings in words.  It is imperative that we learn to listen and discern the Word from the Father of lights(revelation) rather than fall prey to the words which flow from the father of lies.