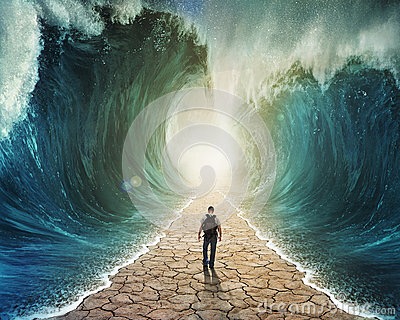 Often times our lives become so full of chaos, self destruction, pain, sin, or failure it can feel as if we are stuck in a sinkhole that is slowly pulling us under.  The more we struggle the worse it gets.  In the story of Noah and his ark we are given a picture of an imploding world.  It is a world where fathers kill their own children, brothers are at war with brothers, and neighbors can’t trust their own neighbors.  It is a world where the worst of humanity makes up the majority.

Then God sends a flood.  It rains, then it rains, then it rains, because God knows exactly how much is needed to wash away the destruction of a humanity gone wrong.  The beauty of the Noah narrative is at the end God sends a rainbow to bear witness that He will not destroy the world in this manner ever again.  But He does not promise that he won’t step in and wash us with the appropriate amount of water.

Thousands of years later, we see His disciples immersing themselves in a baptism of water and God in His grace provides a way for the chaos of a humanity gone wrong to be washed away once again.  Baptism is an ancient ritual that reaches all the way back to the creation narrative in Genesis chapter 1.  Life is called forth by the word of God up out of the waters, and in Christ we can once again step into the ark of God’s grace and begin restoring life to our broken world.

Join me next week on thebrokenjourney.com podcast as we dive into the importance of the interpretive act for discovering intimacy.